WISDOM REVEALED TO THE PERSON, THAT STRIPPING THE BARK OF A TREE CAN KILL THE TREE.

THIS KNOWLEDGE OF TREE BARK TO KILL WAS APPLIED TO BOYS AND GIRLS,MAN AND WOMAN,PEOPLE,

ADMINISTRATORS TO PUT SOMEONE DOWN LIKE A PET OR A DOG, PUTTING A FAMILY PET TO SLEEP,

A PERSON TO BE A ROUGH SLEEPER WHICH WILL GIVE A MEDICAL MECHANIC, THE OPPORTUNITY TO

WORKING IN THE CARE AND HOMELESSNESS INDUSTRY SECTOR

Schematic of photosynthesis in plants. The carbohydrates produced are stored in or used by the plant.

Overall equation for the type of photosynthesis that occurs in plants 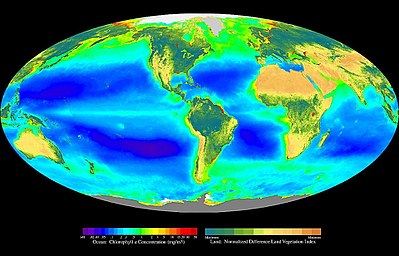 Composite image showing the global distribution of photosynthesis, including both oceanicphytoplankton and terrestrial vegetation. Dark red and blue-green indicate regions of high photosynthetic activity in the ocean and on land, respectively.

Photosynthesis is a process used by plants and other organisms to convertlight energy into chemical energy that can later be released to fuel the organisms’ activities (energy transformation). This chemical energy is stored in carbohydrate molecules, such as sugars, which are synthesized fromcarbon dioxide and water – hence the name photosynthesis, from the Greekφῶς, phōs, “light”, and σύνθεσις,synthesis, “putting together”.[1][2][3] In most cases, oxygen is also released as a waste product. Most plants, mostalgae, and cyanobacteria perform photosynthesis; such organisms are called photoautotrophs. Photosynthesis is largely responsible for producing and maintaining the oxygen content of the Earth’s atmosphere, and supplies all of the organic compounds and most of the energy necessary for life on Earth.[4]

Although photosynthesis is performed differently by different species, the process always begins when energy from light is absorbed by proteins calledreaction centres that contain greenchlorophyll pigments. In plants, these proteins are held inside organellescalled chloroplasts, which are most abundant in leaf cells, while in bacteria they are embedded in the plasma membrane. In these light-dependent reactions, some energy is used to stripelectrons from suitable substances, such as water, producing oxygen gas. The hydrogen freed by the splitting of water is used in the creation of two further compounds that act as an immediate energy storage means: reduced nicotinamide adenine dinucleotide phosphate (NADPH) andadenosine triphosphate (ATP), the “energy currency” of cells.

In plants, algae and cyanobacteria, long-term energy storage in the form of sugars is produced by a subsequent sequence of light-independent reactions called the Calvin cycle; some bacteria use different mechanisms, such as thereverse Krebs cycle, to achieve the same end. In the Calvin cycle, atmospheric carbon dioxide is incorporated into already existing organic carbon compounds, such as ribulose bisphosphate (RuBP).[5] Using the ATP and NADPH produced by the light-dependent reactions, the resulting compounds are then reduced and removed to form further carbohydrates, such as glucose.

The first photosynthetic organisms probably evolved early in theevolutionary history of life and most likely used reducing agents such ashydrogen or hydrogen sulfide, rather than water, as sources of electrons.[6]Cyanobacteria appeared later; the excess oxygen they produced contributed directly to the oxygenation of the Earth,[7] which rendered theevolution of complex life possible. Today, the average rate of energy capture by photosynthesis globally is approximately 130 terawatts,[8][9][10]which is about three times the currentpower consumption of human civilization.[11] Photosynthetic organisms also convert around 100–115 thousand million metric tonnes of carbon into biomass per year.[12][13]

Of course, killing a tree is something I’d never want to do. I see them as old and wise people who have grown and matured for years. Plus they give us so much in return. And yet sometimes, they say, there are good reasons to kill a tree. I’ll probably never understand.

Anyway, I thought it’s good to know, just for the sake of knowing that there is an incredibly simple technique that is often used to kill trees (for legit reasons) and is widely known among horticulturists. I learnt about it just today, and I felt it was worth sharing.

It’s called Girdling (also known as  ring barking or ring-barking). Or, a technique which involves removal / peeling of a ring of bark from a tree, and the phloem layer (Like shown in the picture above). Yes, that’s it, this kills a tree. And it’s slow death. A tree which gets girdled dies gradually in about a year or more.

This is why it works…

The central part of the tree trunk (wooden part) is involved in taking the nutrients and water up to the leaves. The leaves then get exposed in the sun and mix in carbon dioxide to make sugar and other reduced carbon compounds. Most of us know that. But this is what not many know…

The outer part of the trunk – the bark and the phloem layer – also has a solid function that sustains growth and function. It’s responsible to carry the sugar (and other stuff) made by the leaves, back to the root. That is basically food to sustain growth and function of the roots. If that doesn’t reach the roots, the roots don’t receive what is required for their growth and function. Girdling does exactly that – cuts off the down-flow of food. As a result, the root dies and with it dies the whole tree. All of this happens very slowly.

Jumping the Girdle: Some times, trees are able to repair this damage. It’s called a jumped girdle. To prevent that from happening, often smear herbicide over the girdled area.

Better Fruits: This technique is also used by some farmers to force the tree to bear better fruits – as no sugar goes down into the roots – the fruits are usually bigger and better if they come from a girdled tree. Of course these better fruits come with a price.

Girdling is particularly a good way to end trees like Aspens because as we know from Pando, many other Aspens can sprout up from the roots and cause a bigger mess if just the top part of this tree is cut off.

Girdling is a better way to kill a tree because it gives the environment time to adjust, also it is cheaper and prevents damage to the other delicate plants around the tree.

Stay Away From The World’s Most Dangerous TreeFebruary 2, 2014In “Biology”

The Sweet Tale of the Mysterious Tree LobsterApril 21, 2014In “Biology”

8 thoughts on “An Incredibly Simple Way to Kill A Tree”

Your email address will not be published.Required fields are marked *

Notify me of follow-up comments by email.

Notify me of new posts by email.